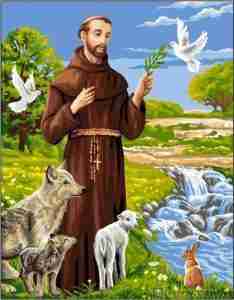 ?But who is this “great” “younger” brother

Our saint who was born in 1182 was the son of a wealthy merchant. His father gave him the name Francois (which means French). His mother was a delicate and gentle woman (of French origin), who wanted to call him Giovanni who belonged to a wealthy bourgeois family

This spoiled child who never lacks anything, becomes a young teenager, of a funny and generous nature, grants himself all pleasures, and celebrates with his friends. But yet, his life will remain pure

Indeed, this young man who dreams of being a knight has a great appreciation for all values and all courageous principles, including respect for women. Moreover, this appreciation that Francis holds for chivalry will become ambitious. Ambition will overwhelm him

It must be said that the young Francis had the gift of living fully and deeply, which made him participate in societal problems. Let us note that one of the main problems of this bourgeois and middle society was precisely, joining nobility

The aspirations of the young man on one hand and the aspirations of his society on the other hand, integrate each other and will lead to the participation of young Francis in the armed conflict between Assisi and Perugia. During these battles, Francis of Assisi was captured and imprisoned for a year. He kept his optimism and joy in his cell. But it must also be confirmed that despite his imprisonment for that year, which was followed by a serious illness that made him locked up in his bed, it granted him maturity and a deeper vision of life. Then little by little, he would see himself attracted to the Lord. He was confused and nothing seemed clear to him. Yet, he allowed himself to get involved in this new crowded atmosphere, and began to go to the churches, until the day came when he found himself in a rundown church in Amiens, and heard clearly a voice saying to him:

“My church is collapsing, build it”

He devoted himself to the task of rebuilding and repairing the destroyed churches, and did his best to raise the necessary money, and benefited from his father’s wealth, even when the latter was away due to travel, nothing stopped the young Francis. Moreover, he spared no effort and worked with his hands to carry out the task that he was called for. For these reasons, he was one day accused of wasting his father’s money

When the father returned, he accused his son of insanity and asked for his money. This was done in several ways, all of which were violent and brutal, but eventually, the father obeyed the bishop, who understood well the spirit that motivates Francis

But with wisdom, the bishop summoned the father and son in this critical situation, to a meeting to resolve their disagreement. This meeting was attended by a large crowd of curious people including everyone who wanted to see the end of this conflict.

The angry father asked to get his money back, then the son gave everything to his father without hesitation… everything, even his clothes, and the father took it back and cursed his son

We also remember that the bishop covered the young man with his cloak: Don’t we see in this gesture, the church’s protection for this young “messenger” who responds to the call by his separation and abandonment

We may have to contemplate Francis’s behavior, as his abandoning was not just a reaction to the father’s attitude, nor out of pride, but was a choice for life and family. From now on, he will find in God a Father, a Heavenly Father, and soon he will have many brothers, who will accompany him on the path of poverty, love and acceptance of the other in a completely different way

We now turn to the concept of “the other” according to Francis of Assisi, so to speak, our saint is the one who reveals this “otherness” vision

In fact, for him, the other has many meanings. The other could be the poor, the ignored, the despised, the sick and the leper …….The other is not only the weak, who is weakened by the difference that makes him (the other) but the other is also the powerful who possesses power and authority. However, what makes him (the other) is our different beliefs…… This concept of otherness, according to Francis, will leave each of them correct and determine his path, mission, and all of his history. We will see the new contribution of Saint Francis, which is the vision of casteism with all its elements. Another “brother” that should be loved and respected

(The other transcends the human framework)

Saint Francis was called the pastor of naturalists in 1979. In this regard, we remember his hymn to creatures, what harmony and humbleness

Praised be you, my Lord
with all your creatures

Praised be you, my Lord
through Sister Moon

Praised be you, my Lord
through those who forgive
for your love

In the world of Saint Francis, the world of love and brotherhood, equality prevails. Man is neither Lord nor Master, only God is Lord. Man is a brother to everything and every person. He should see, appreciate, thank, and live in harmony with the universe, this divine and perfect grace

Therefore, for Saint Francis, the universe is a motive to worship, to praise, to adapt and to live in brotherhood. But in this universe, where everything is mixed up, Saint Francis has preferences

In fact, he will remain loyal to her throughout his life. Saint Francis will beg to be able to feed the needy, to restore a church, and not for the sake of possessing. He will spend his whole life wandering about the roads, meditating, praying, working and even working a lot …….. whatever the work is

He will teach everyone he meets on his way some commandments, including seeking to love others not for the sake of being loved. Since giving is love, he will teach his brothers and followers and encourage them to give and give everything with joy

The love that St. Francis preaches and lives will expand to take on more meanings such as this beautiful prayer that the world needs more and more and that Saint Francis applied through his meeting with Sultan Al-Kami

“Where there is disagreement, let’s make peace”

This poor little monk is a peacemaker and was the first to establish interfaith dialogue.

In 1219 AD St. Francis decided to start the process of reconciliation and peace, by going during the period of war to the opposite camp to meet the Sultan, despite all the risks

He saw the “other” in the Sultan, who is different, but not an enemy. The other has his own culture and belief, this is the only difference, but this difference does not change the truth: he is brother and will remain so

He is a brother who is loved and respected. This is the faith of Saint Francis and the eternal lesson in this regard

This elder brother’s life ends in October 1226, and it is certainly not very long but still very rich and very inspiring. He instilled, imposed and lived a lot of values

:We can cite his examples

*Equality which is capable of uniting everyone as brothers, whether they are masters or servants, respected or outcasts from society. His door is open like his heart, they were always open to everyone

*He called for action, effort, sacrifice, free and dedicated work

*For him, every action (whatever it was) was a gesture of love and brotherhood

Taking this value into account, which manifests his choice of “the lady of poverty” and his devotion to this choice, remains to confirm that the basis of all these values is the message of the Gospel

This beautiful prayer, which

Lord, the house of love

Make us respect with your love